We comparing counting sort, bucket sort and radix sort, i realized it’s all about trade off between memory, time, and simplicity of data structure.

Radix sort: n log_r(k). Essentially radix sort performs bucket sort log_r(K) times. It can deal with larger key range (than bucket sort).    r is the base here. the larger is r the better time complexity we got.  but it also means more memory. remember the bucket   array in radix sort is of length r (shorten than n or maximum value of K)  If we use n as the base, it becomes a normal bucket sort. why?   cuz now we have only one ‘digit’, so we only do one bucket sort/counting sort.

Bucket sort: is a generalization of counting sort. The number of bucket sort used  is n. and range can be larger than n. thus we saved some space than in counting sort. but it loses the worse case of O(n+K).  the data has to be uniformly distributed.

Do more of what you can uniquely do, and less of what other people can do”… Gloria Steinem.

you can get the marriage license in other city hall within California.

This is a  great post I found on stackoverflow.

Here is everything about Python dicts that I was able to put together (probably more than anyone would like to know; but the answer is comprehensive).

NOTE: I did the research on Python Dict implementation in response to my own question about how multiple entries in a dict can have same hash values. I posted a slightly edited version of the response here because all the research is very relevant for this question as well.

From this graph below we can get an idea how over-valued spy is getting.

Also, you can read this article: http://stockcharts.com/articles/decisionpoint/2016/07/sp-500-2016-q1-earnings-results-market-overvaluation-grows.html 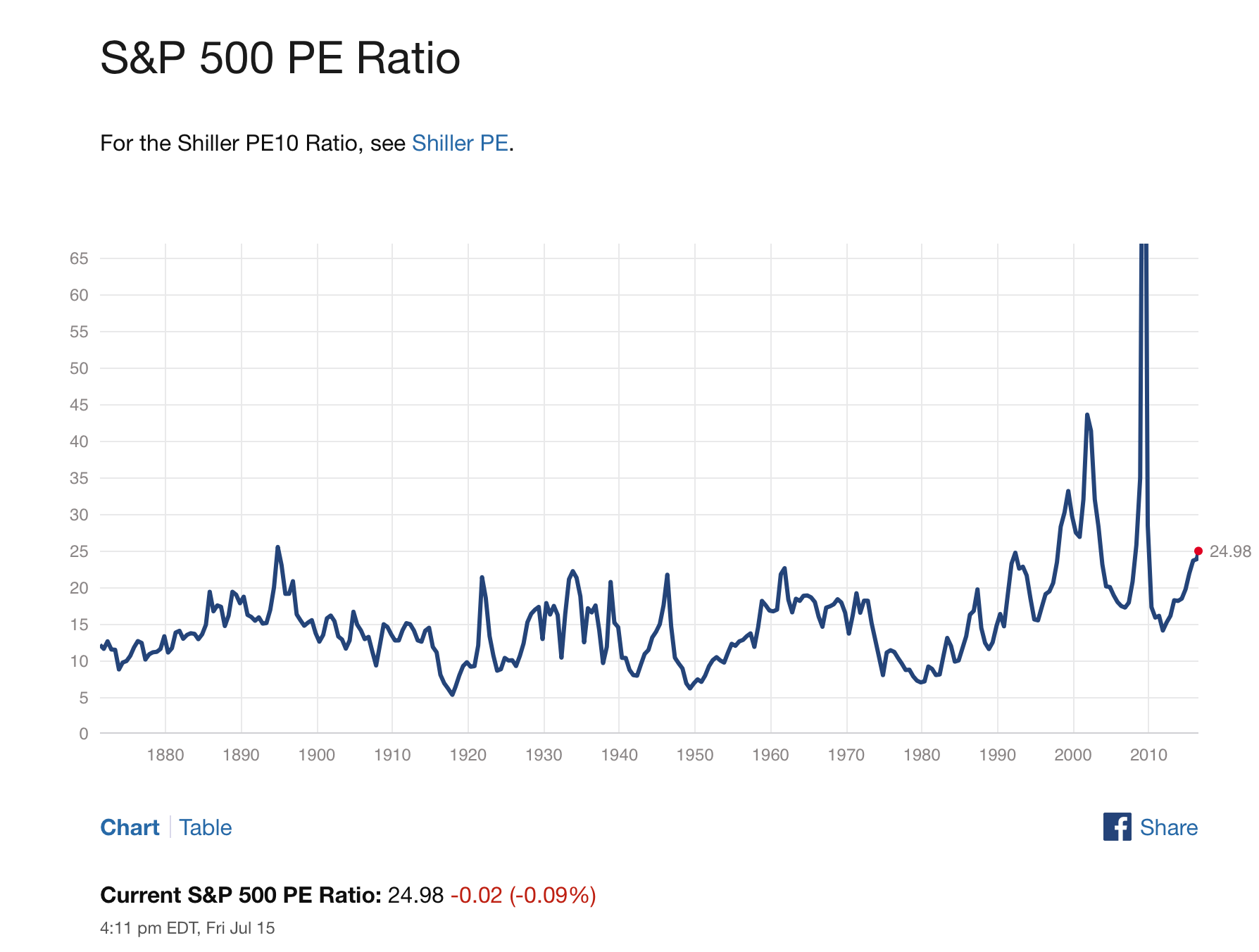 I’m betting Brexit will happen and I have money on spy put right now. I wish I didn’t bet as I realize it is not a wise thing to bet on such a event. My original plan was to enter the position last Friday and then retreat with profits before the brexit result is announced but I was trapped since last Friday. I already sold some of my position with loss yesterday but still keep a large portion. The Market Maker definitely knows what I’m thinking about. The market has been rallying since last Friday and seems so sure Brexit will fail.

Let’s see.  Right now the results showing leaving is not that unlikely.

Beyond my investment, I personally believe British should exit from EU for their own benefit, not for some great aspiration of other countries. I couldn’t see any benefit for the country and its people to stay in EU, except for big international companies and its allies who need its voice in EU. I don’t believe British will become less important in world politics if it leaves EU. Quite on the contrary,  I believe British will become much more important as now it stands an independent country and gets to sign trade deals with other countries independently, with other commonwealth countries, United States, China, Japan, etc.

I also don’t believe EU will punish British by shutting down its markets. someone would say British will lose the whole market while EU gets to distribute the loss between its members. but I think Germany will be most heavily impacted and it will do something for its own benefit.